The city of Yavatmal has a lot to tell, which it does through the various cultural elements that have been the foundation of this city. Once part of great empires and sultanates, Yavatmal has been a dynamic city.  It imbibed the elements of all the reigns and people that came to her and become herself. This makes visiting this great place a worthy experience.

Language of the Native Population

Large numbers of the native population of the city speak Marathi. But the district of Yaotamal is also home different tribal communities who have entirely different cultures that run parallel to the agrarian and semi urban cultures of the city. Some of the different languages spoken by them are in the form of Gormati, Banjari, Gondi, Marwari, and Sindhi. 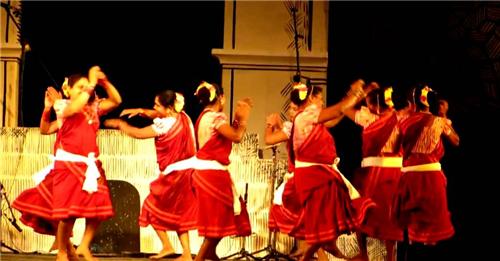 Gond and Pardhans are two prominent tribal communities of the district. Their lifestyle is hugely influenced Hindu customs and culture. Pardhans are a subsection of the Gond community. Traditionally they are musicians and bards. The Gonds have different sub sections under them like Raj Gonds, Dadves and Mokasis. These two communities represent about 10 percent of the population in the district.

This community, according to census reports, is an aboriginal tribe. Their origin is hard to pinpoint. Over the years they have adapted their lifestyle to much like that of the Kunbis. The community is largely agrarian. Religiously they attach themselves to the Vaishnava sect of Hinduism.

Kolam tribe is one of the oldest of all the communities of Yaotamal. They are Dravidian in origin and speak a unique language of their own. Their ancient identity is still kept alive by some primitive customs. Their dress code Is akin to the Kunbis.

The Banjara tribe of the Yaotamal constitutes 6 percent of the population in the district. They bear the name of Labhana since their occupation in olden times involved carrying salt. The tribe is primarily centered in the forested areas in the southern part of the district.

The Malis are a community made of several sub divisions: Phulmali, Bhange, Bawne, Jire, Harde, Ghase, Kosaria and Pahad. Their chief occupation involves growing vegetables. These tribes are some of the most ancient tribal communities in India. Their culture is the product of thousands of year’s experiences and co-existence with others. Each having a unique element representing them, the life and customs of these amazing people give a peek into the history of the ancient land that is India. Apart from them Buddhists is also an important community.

Home to different religions and tribal communities, The city of Yavatmal has a lot to tell. But she does it through the various cultural elements that have been the foundation of this city. Once part of great empires and sultanates, Yavatmal has been a dynamic city.  It imbibed the elements of all the reigns and people that came to her and become herself. This makes visiting this great place a worthy experience.

Some of the famous festivals in Yavatmal;
Both urban and tribal communities celebrate these fairs. All the major Hindu and Muslim fests like Diwali, Bakar Eid and Ramazan Eid are also celebrated.